Take an unforgettable journey with former TV News Anchor and Secret Columbus book author Anietra Hamper to uncover a side of Columbus most people have never seen, or even knew existed. With Secret Columbus’s author as your guide on the tour you will visit some of the hidden, fascinating, and unusual places in Columbus that are revealed in the book. In a special partnership with career investigative journalist Anietra Hamper, Columbus City Adventures offers several tours created from the topics and stories from Secret Columbus that will make you go home with a new perspective on the capital city. 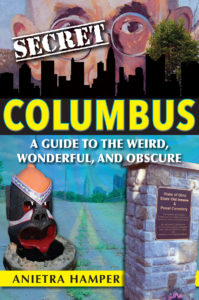 Secrets of the Statehouse Square

Who knew there are so many secrets about the city of Columbus right in the heart of downtown? Columbus City Adventures and former television news anchor Anietra Hamper, author of the award-winning book “Secret Columbus:A Guide to the Weird, Wonderful and Obscure” have teamed up again with a walking tour around Capital Square to uncover city secrets that most people never knew existed. From the city’s first (and still existing) air raid bunker to local secrets about candy, join us for this unique walking tour in downtown Columbus.

This tour is provided on air-conditioned bus transportation and lasts approximately 2.5 – 3 hours. Guests will get on and off the bus during the tour to visit some of the sites, there will be some walking on grass so please wear appropriate footwear. Sites may occasionally vary due to road closures and other unlikely eventualities.

“Secret Columbus” tours are available by appointment for private groups.